You are here: Home » Blog » Articles » On Julia Bates, Danny Brown, and Justice 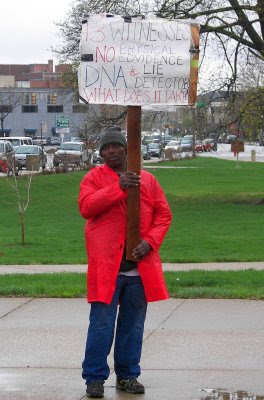 I have written about my friend Danny Brown many times in print, in journals, and on this blog. He is a man wrongly incarcerated for a 1981 rape-murder, and who DNA evidence helped free in 2001.

Danny, however, remains in legal limbo becauseLucas County Prosecutor Julia Bates and her investigators still consider Danny Brown to be a suspect. Given the fact that there is no statute of limitations on murder cases, Danny could conceivably remain under a cloud of suspicion for the rest of his life. Moreover, as long as Danny is a “suspect,” he cannot collect the compensation due to him under a state program set up for such cases of wrongful incarceration.

I met with Danny today for a few hours, and I picked him up in front of the courthouse. Lately he has been on a one-man picketing crusade at the building, trying to get people interested in this ugly case of injustice. At the downtown library we passed Jack Lessenberry, ombudsman of the Toledo Blade, who promised he would try to help if Danny came to his office with his story.

Bates, of course, has no incentive to take such a case to court, since there is no physical evidence linking Danny to the murder victim. Moreover, Danny passed polygraphs and provided prosecutors with 13 witnesses who testified that Danny was at a party on the other side of town when the murder occurred.

So Jack Lessenberry’s help, should it materialize, will likely be just another of many editorials and articles pointing out the horror that has been perpetrated on Danny Brown. It will take a governor, a state attorney general, or ten thousand angry peasants with pikes and torches to get Julia Bates to change her tune.

So if you would like to join the mob of angry virtual peasants, feel free to call Julia Bates at (419) 213-4700. Julia Bates can be emailed at jbates@co.lucas.oh.us if you would like to let her know your feelings about the injustice her office continues to heap on Danny Brown. You can also follow this link to learn more about Danny Brown’s fight for justice in greater detail.

I will also provide information on this site in another week or so for anyone who would like to provide financial help to Danny Brown in his campaign to clear his name and to collect what he is owed for the 19 years he rotted in state prison cells. Up to this point Danny has been too proud to ask for any help, but I think the past eight years of legal limbo have worn down his pride a bit.

Originally Posted by historymike at 3:40 PM

You can support Danny Brown in many different ways.

1. If you have any information regarding the case, Sherman Preston, or support please contact:

3. Or you can send an email to the prosecutor, Julia Bates

Sign up for the latest developments in the Danny Brown case.

Sign up to receive the latest developments on the Danny Brown case and support the cause.